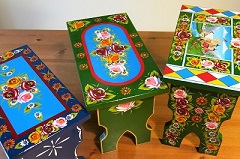 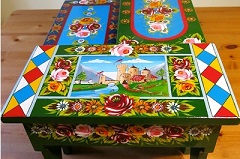 Delighted to say that three of my boatman's cabin stools have been chosen to appear in the 17th South Holland Open Art Exhibition to be held at the South Holland Centre, Spalding, between 2nd and 9th March. They will sit alongside work from other professional and amateur artists from the East Midlands which range from fine art to ceramic and sculpture. Here's the link if you want more details: southhollandcentre.co.uk/whats-on/view/south-holland-open-arts-exhibition1 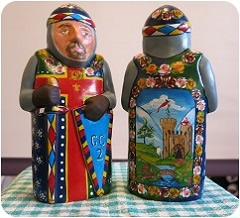 I have just finished a pair of "mini-barons" for some keen narrowboaters. Following the success of the Lincoln Baron's trail last summer, the Lincoln Businress Improvement Group has continued the sale of mini-barons, 9 inch high replicas of the statues, to raise money for the Trussel Trust food bank charity. These are sold blank for people to decorate themselves. I was asked to produce a pair of mini-barons in the waterways style and here they are!

All 25 Barons were auctioned off in aid of the Trussell Trust Food Bank Charity. My Lincolnshire Waterways Baron sold for £6,800. In total the auction raised £167,000 for the charity.

Season Board Commission for Local Playgroup

I was asked my a local playgroup to paint a board showing the seasons so the kids can be taught about the changes in the seasons through the year.

The board was to be situated on the back of a building and they wanted it split into 4 sections. I suggested that the same scene was used in each picture but depicting each seasons: spring, summer, autumn and winter.

I am very pleased with the result. Here it is in situ. 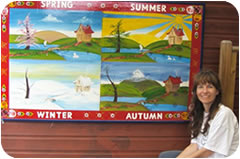 I wanted to make each scene as interesting and informative for the kids as possible to promote discussion around the subject. So, in Spring, you can see a ploughed field and then in Summer the corn has grown and there are poppies amongst the crop, the rose around the cottage door has grown and bloomed and the swan has had her young, and so on.

Can you find the robin? 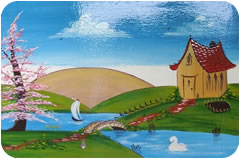 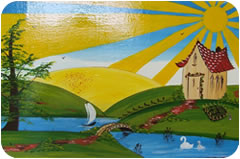 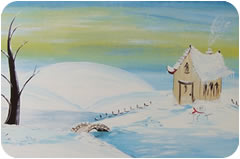 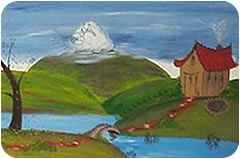 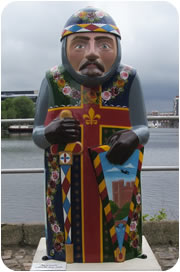 This year I was lucky enough to have a design for a Lincolnshire Waterways Baron accepted by the organisers of the Lincoln Barons Charter Trail to mark 800 years of Magna Carta. Artists from around the region were invited to submit designs to decorate 25 two metre statues of Barons which would be placed around the city for the summer forming a walking trail. Visitors are able to collect clues from each of the Barons and win a bag of King Johns gold (chocolate!) coins.

As Lincolnshire is currently investing a lot of money on the restoration of its canals with the aim of reconnecting the county with the rest of the waterways network, I wanted my Baron to pay tribute to that and encourage people to think about the importance and potential of waterways in our county. So, I designed a Roses and Castles Baron which arrived at its plinth overlooking the Brayford Pool Marina by the citys water taxi.

The trail will be on throughout the summer with the Barons being auctioned at the end to raise money for the Trussel Trust foodbank charity. 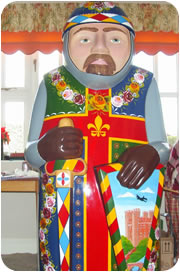 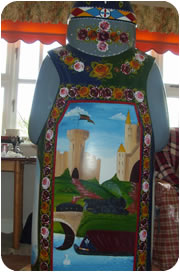 Images subject to copyright laws. Please email at the address below if you wish to use them. All items shown on this website are for decorative purposes only.